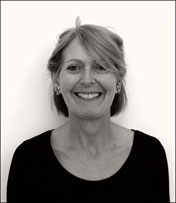 Elizabeth Butterworth is not the first British artist to succeed in capturing on paper the brilliant plumage of Macaws, but with Edward Lear she must be considered one of the best. Certainly she is without rival this century. Her success stems partly from intense powers of observation and party from an encyclopaedic knowledge of her subject. She has bred Macaws, looked after them, fed them and listened to their noisy antics from the first call of the morning to the last shriek at night. She has sketched them in the privacy of her back garden and in their natural state in the rain forests of South America. She has examined the skins of dead birds in natural history museums in London and New York and she could tell you the number of feathers in a tail and the size of a beak to the nearest millimetre.

It is this attention to detail combined with powers of observation that lifts her prints, watercolours and drawings from plain description into the realms of high art. Although she belongs to a distinguished ornithological tradition in which British artists like John Gould and Archibald Thorburn have excelled, she seems closer to a watercolourist like Edward Lear who can be appreciated as an artist on his own level and whose work appeals to collectors who do not know a Macaw from a Toucan. Her realism has surreal or super-real quality, and it is this aspect of her work which caught the eye of critics and curators on both sides of the Atlantic (and in Australia) and which has led to her work being exhibited alongside that by other contemporary artists in prestigious shows in New York, including the survey of contemporary art held at the Museum of Modern Art in 1984

Elizabeth Butterworth was born in Rochdale and began her art studies at the local art school before moving south and completing her training at the Royal College of Art. In 1975 she had her first show with Angela Flowers, a London dealer with an enviable record in spotting young talent. Later she exhibited at Fischer Fine Art and this was followed by other exhibitions in New York, including a show at the Metropolitan Museum. In 1990 she was invited to show her work at the Adelaide Arts Festival.

Elizabeth Butterworth was born in Rochdale, Lancashire in 1949. She now lives in Sussex. She is an ornithological artist whose rendering of Macaws was described in 1993 by the art historian and critic Ian Dunlop as "without rival this century".

Elizabeth Butterworth's first exhibition at the Redfern was in 1997 - showing again in 2001 and 2009. Also in 2001 she showed Amazons, Macaws and Cockatoos at the Natural History Museum, London. She has had five solo shows in the USA including one at the Metropolitan Museum of Art, New York in 1985 and has also shown her work in Ireland and Australia.